Cayman Islands at a Glance

Welcome to our home – the magical and breathtaking Cayman Islands!

Whether you are looking for a rewarding real estate investment, a tropical vacation hideaway, or a luxurious new home for you and your family, our ERA Cayman Islands team is ready and truly excited to help you find the perfect property!

Let’s begin by taking you on a quick run-through of some of the most frequently requested information about the Cayman Islands:

The Cayman Islands is a self-governing British Overseas Territory located in the western Caribbean Sea. It is one of the six island states that comprise the Greater Antilles group of islands, with Cuba and Jamaica as its closest neighbors.

With a territory that spans 264 square kilometers, the country is comprised of three main islands: Grand Cayman, Cayman Brac, and Little Cayman. The capital city is George Town, which is located in Grand Cayman — the most populous and progressive of the three islands.

How did the Cayman Islands get its name? The first recorded sighting of the Cayman Islands was logged in during Chritopher Columbus’ last voyage to the West Indies in 1503. It is said that he referred to the islands as “Las Tortugas” in reference to the abundance of tortoises in the surrounding waters. Eventually, the name evolved into “Caimanas” or “Caimanes” from the local name for marine crocodiles that used to thrive in the area.

With an estimated population of 66, 497 in the early part of 2021, the country is home to a vibrant global community of over 130 nationalities living and working in the Cayman Islands. 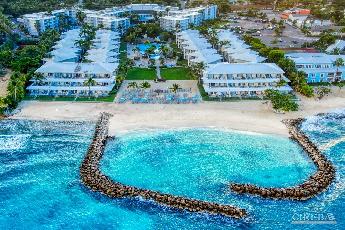 Almost half of the country’s workforce are comprised of non-Caymanians who have been admitted under the prevailing work permit system. Moreover, recent years have shown a growing number of individuals and families moving to Cayman under the different residency by investment programs offered by the government, as well as an increase in digital nomads covered by the Global Citizenship Concierge Program.

Cayman has a tropical marine climate typified by warm, drizzly summers from May to October, and cool, dry winters from November to April. No matter what the season, moderate temperature can be enjoyed throughout the year.

The official “hurricane season” is from June to November, although the chances of being caught in a severe tropical cyclone during your stay is statistically low. If you are planning to visit Cayman during these months, you can monitor hurricane activity via the National Hurricane Center.

The Cayman Islands is a parliamentary democracy with judicial, executive, and legislative branches. The present constitution, which came into effect in 2009, provides for the government of the country as a British Overseas Territory.

Considered one of the world’s leading financial centers, Cayman’s economy is driven by a largely pro-business regulatory environment. Aside from the strong presence of major institutions in banking and finance, it also has an extensive offshore registry of about100,000 international companies.

Tax neutrality is one of the biggest attractions that draw high-end global investors and fund managers to the Cayman Islands. In addition to having zero corporate taxes, there are also no direct taxes of any kind imposed on its residents.

Named among the top four economies of the Caribbean, the Cayman Islands enjoys one of the highest standards of living in the world.

In 2021, the Cayman Islands Dollar (KYD) ranked6thamong the strongest currencies in the world –  making it the most highly valued currency in the Americas.

However, US dollars are widely accepted in hotels, shops, and dining establishments, with the change usually given in the local currency.

Ranking high among the20 best beaches on the planet, no trip to the Cayman Islands is complete without visiting the world-famous Seven Mile Beach on Grand Cayman, where most of the premiere hotels and condominiums, bars, and restaurants are also located. However, it’s only one of the many areas in Cayman where you can enjoy sun, sea, and sand! Go a little further and discover the beaches of Cayman Kai, Rum Point, and Smith Cove on Grand Cayman, or Sandy Point and Owen Island on Little Cayman. All of Cayman’s beaches are free and open to the public.

Cayman’s waters are also considered to be some of the best diving and snorkeling spots in the Caribbean. There are plenty of spectacular dive sites just off Grand Cayman; you can also plan a day trip to the sister islands.

Mainstays among the top attractions in Cayman are adventure trips to Stingray Park, the Kittiwake Shipwreck and Artificial Reef, observing marine life at Governors Beach,  exploring the Cayman Crystal Coves, and walking the Mastic Trail, to name a few. You can cap the day by chilling out at any of the local bars or trying out the wide array international cuisine available in town. Shopping aficionados can find charming, hand crafted treasures from local artisanal shops, or splurge in any of the sprawling outdoor malls that carry the latest designer goods.

Tourism is one of the driving forces that propel Cayman’s economy and is particularly aimed at an upscale, luxury market. The country received approximately 2.33 million international tourist in 2019 via air and sea, until it was compelled to enforce strict travel restrictions as part of its “safety first” response to COVID-19. At present, Cayman has laid out a plan for its phased reopening to tourists, in preparation for a full reopening in 2022.

Owning real estatein the Cayman Islands is a simple and straightforward process that offers many distinct advantages to foreign buyers. For instance, there are no restrictions on foreign ownership of real estate for personal use, and if a property is purchased as a pure investment vehicle then no tourist tax shall be levied if the property is rented to local residents. Government guarantees all land titles and their secure transfer.

Moreover, the presence of the Cayman Islands Real Estate Brokers Association (CIREBA) ensures that all its members strictly adhere to internationally accepted business standards and code of ethics.

Cayman is easily accessible by air through several international gateways. The Cayman Islands Airport Authorities (CIAA)provides a comprehensive list of international airlines and destinations with direct flights to and from the Owen Roberts International Airport (GCM) in Grand Cayman.

As COVID-related travel restrictions still apply, visitors are advised to check Cayman’s Travel and Overseas Guidance for the latest updates.