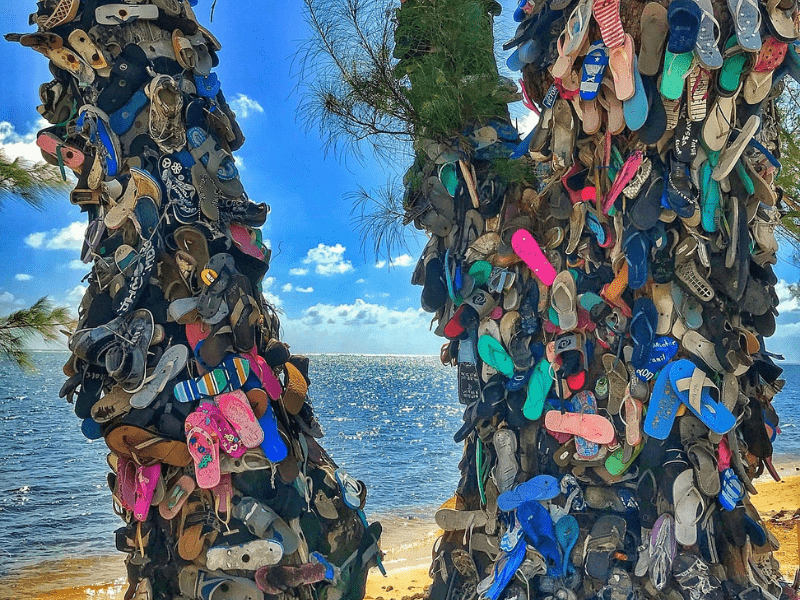 Anyone who has lived in the Cayman Islands for any length of time knows that South Sound looks vastly different than it did years ago.

As more and more people flock to our sunny shores, their needs for housing and amenities in close proximity to George Town and the surrounding areas, has pushed development in the area to a fevered pitch.

One thing, however, has stood the test of time and redevelopment – Cayman’s own landmark Shoe Tree.

This landmark, which is in essence a Casuarina tree blanketed in sandals that have been nailed to it by visiting tourist, has long been a place where tourists come to nail up the prevalent preferred footwear choice for the beach with notes and well wishes.

The place thus has become a small pilgrimage site of sorts, and has been displayed online as a local landmark.

Locals and residents of the South Sound district, however, don’t necessarily see the “landmark” as a positive thing. Given the focus on saving the environment and the preservation of the world’s oceans – especially lately – many locals and environmentalists don’t see the necessity of the tree.

Citing pollution and environmental concerns, many folks are asking why the sandals haven’t been removed by now.

At some point, through wind, weather or sheer rotting of the dead trees over time, many of these shoes end up in the ocean or littering the surrounding areas.

Given that sandals are often made with non-recyclable materials, a growing number of activists and concerned citizens see the practice of nailing the shoes up as nothing more than pollution.

Pollution, especially for the world’s oceans, is a gigantic and ever-increasing global crisis.

It is estimated that over 80% of all marine pollution comes from land-based sources. Moreover, in many developing areas of the world (like the Caribbean for instance) it is thought that 90% of the wastewater generated and 70% of the industrial waste generated in these areas ends up discharged into the sea without any sort of treatment whatsoever.

More shocking still is the fact that planet Earth’s oceans now have something to the tune of 200 known “dead zones” wherein the oxygen is so depleted that little to no sea life can exist there. Add in choking algae blooms, coral reef destruction, fish kills, kelp bed eradication, shellfish poisoning, and sea mammal deaths and we are approaching a critical mass of problems in our world’s largest bodies of water.

In our big neighbor to the north, the USA, it is estimated that upwards of 60% of all coastal rivers and bays are severely degraded.

Though the shoe tree phenomenon is a small drop in the bucket when you look at the global crisis with the world’s oceans – it can be a very powerful symbol of the ocean’s plight.

Local activist group Plastic Free Cayman have been pushing to see the local littering laws more stringently enforced to help combat and stop people from leaving their shoes/litter/impact at these would-be landmarks.

They contend that visitors are destroying the vegetation in these areas and leaving behind nothing but non-biodegradable pollution in their place.

Is the underwhelming experience of nailing a sandal to a tree worth the destruction of the habitat and the natural beauty of the coastlines?