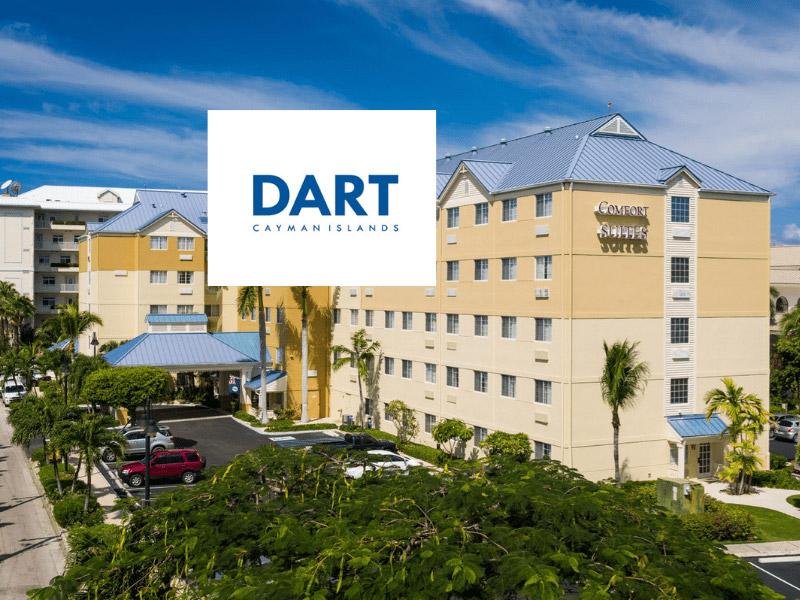 DART has been busy bolstering their real estate holdings in the Cayman Islands.

Another Hotel for DART

Recently it was announced that DART have entered into a contract to purchase the Comfort Suites on 7 Mile Beach. The hotel, which is owned by Seven Mile Suites Ltd., is right in the heart of the beach, and affords its guests easy access to all the shops, restaurants and nightlife in the area (in addition to the awesome beach!). The hotel is part of the Choice Hotels franchise and has been operating in the Cayman Islands for over 20 years.

Staff Set to Stay On

The current management have remarked that they are happy that the DART group sees the value in their business, and that the current makeup of the staff is 90% Caymanian. DART reps say that all the staff will be welcomed to continue on working under their new ownership.

In purchasing this property, DART are broadening their hotel portfolio to include offerings for different tiers of vacationer’s budgets.

Coupled with the Beach Suites, The Ritz-Carlton Grand Cayman and the Kimpton; they now have offerings on the beach for nearly all price points. From “budget” to high-end luxury accommodations, DART has something to rent for everyone. Add in the ownership of Mr. Dart’s personal home and the Royal Palms site – and whatever else they may own – the group controls a great deal of beachfront in Cayman, and is far and away the largest private land owner.

DART is also known to have large stakes on Little Cayman and Cayman Brac. Some speculate that the group owns over one third of all the land in the Cayman Islands.

Positive or Negative for Cayman?

Many people believe that this rampant investment is a net positive for the tiny island nation. They cite civic improvements, improved infrastructure, new job creation and economic growth as some of the driving factors. Others say that this investment has helped steer the country through the global financial crisis, and through the aftermath of Hurricane Ivan.

Detractors have pointed to pitfalls. They ask if it is healthy for the long term to have such a large private party owning so much of the country. They say that the lack of competition in the marketplace gives an unfair advantage, and that many individuals are being priced out of owning beachfront property in Cayman.

Some also hint unfair advantages in dealing with the government as private parties become too large to be effectively regulated.

Whatever your opinions are, its clear that the DART Group has invested heavily in Cayman, and it appears that they will continue to do so.

Through horizontal integration the group is strengthening its position in the vacation rental market and broadening an already extensive portfolio on 7 Mile Beach (and across the other districts of the Cayman Islands).

This recent acquisition of the Comfort Suites is proof positive that this strategy is ongoing!