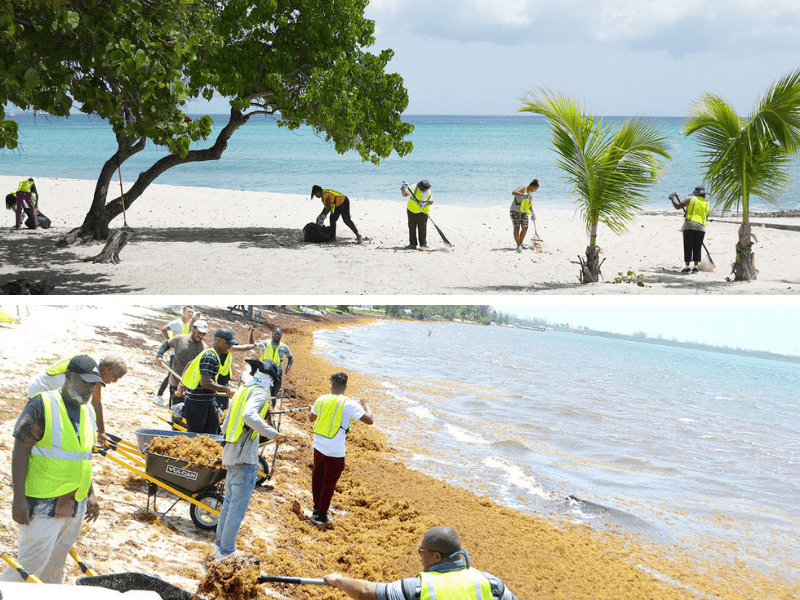 Take heed this summer on the roads and beaches people, there are Caymanians hard at work!

Nearly 500 local citizens have been out in droves as the NiCE program rolled out for the summer. NiCE, or the National Community Enhancement clean-up program, recently began various efforts along the nation’s beaches and roadways. Their aim is to clean-up and beautify the public spaces that we all are lucky enough to use and enjoy.

For this summer’s works, the group will largely be attempting to tackle Cayman’s ever-growing sargassum problem. Sargassum is seaweed that washes ashore and clogs the beachfronts and shallows with rotting plant matter.

An increasing annoyance to locals and visitors alike, the seaweed clogs the shoreline and renders the beach and shallows virtually unusable. It also creates problems for turtles and removing it is tenuous as the crews try to limit erosion of the natural sand and protect sensitive wildlife. There is also a problem with the potentially dangerous gas given off as the sargassum decomposes. Additionally, it leaves a very foul odor that is noticeable for miles.

The Department of Environment has been working closely with NiCE staff and the workers to ensure that they are safe as they go about their works. Workers with breathing problems or sensitivity have been tasked with jobs away from the seaweed.

Minister Hew (Infrastructure) indicated that this annual program has been pushed forward a month earlier than normal due to the rising seaweed problem and has commended the workers for their organizational skills, and for reaching work goals earlier than anticipated.

Why is Sargassum a Problem?

The seaweed bloom is one of the largest on record and mitigating its damage is an uphill battle. So much so that a special task force was created to deal with the issue by the Department of Environment. Additionally, because of the sensitive nature of the ecosystem, hand removal or through the use of rakes is far superior to heavy machinery or harsh herbicides.

The NiCE program isn’t just all about seaweed removal. Drivers should take note and be mindful as crews can be seen throughout Cayman’s districts cleaning up the roadsides, underbrush, clearing brush and removing refuse near the thoroughfares.

Workers have also been seen around civic buildings and around the football pitches, sports venues and other public spaces.

What is the NiCE Program?

The program offers full time paid work for two weeks for Caymanians who are unemployed or who are not fully employed. The rate is $10 per hour and offers those who work a favorable reference when applying for jobs in the future.

There are opportunities for workers to demonstrate their skill sets and to help them on their team building skills.

The supervisors of the crews give the workers an evaluation at the end of the period and provide the aforementioned reference documents to assist with job searches in the future.

Programs like NiCE are essential to building and sustaining thriving local communities and public spaces. This project is coming to an end after the two weeks but we are thankful for their hard work and dedication, they are making Cayman a better place for all of us!