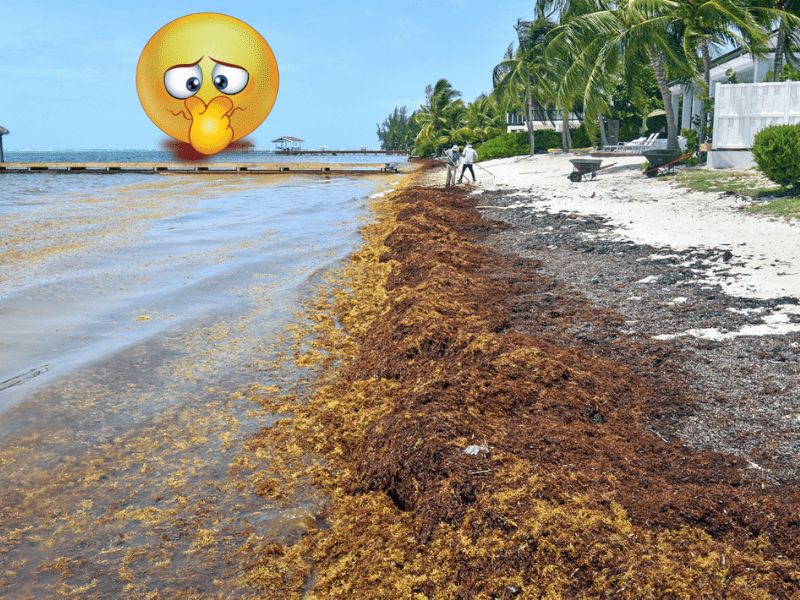 Those of you who’ve spent any length of time in Cayman have eventually run into it. It starts as a creeping odor as you drive up certain parts of the coast. You encounter it walking on the beaches. It inundates and chokes out access points to our normally crystal clear Caribbean waters. It’s called Sargassum. And it stinks! Fear not though, Government says it has a plan (well its working on a plan anyways).

Though not always prevalent in Cayman’s waters, with the onset of summer here it seems that certain parts of the island are currently clogged with the stinky stuff. It oftentimes washes ashore and piles up several feet high on the beach. Government says they’re working on a plan. The Minister for Parks and Recreation has stated recently that a long-term plan is being drawn up to battle the ever-growing problem of the beach weeds. Here’s your science minute – Sargassum isn’t actually a weed per se but is a genus of brown macro algae and there are numerous species of it in the temperate and tropical oceans of the world. Mr. Joey Hew, the Minister who’s reported on this, says that the equipment used on the island here to combat the sargassum has, in fact, broken down. Replacement equipment is said to be in the $150,000 dollar range. He also stated that additional funds were needed to invest in a more far-sighted approach to tackling the problem, including more staff and more specialized removal equipment. In speaking to the LA recently, Mr. Hew said he was considering enlisting ‘Nice’, or the national summer clean up program, to source workers willing to undertake the extensive beach clean ups needed.

This will be challenging work, however. The work is arduous and unskilled in many facets and the environmental impact of the works must be considered. This is especially important during turtle nesting season, as the sand must not be removed from the beaches along with the sargassum. The Minister has stated an overarching goal of a long-term strategy in tandem with the Department of the Environment is what is needed. The most seriously affected areas would need to be tackled first and the turtle-nesting season, ocean currents and winds would all play a factor in the strategy.

Fear not though, while the formal strategy is still being ironed-out, works are still being performed to battle the smelly sargassum. Staffers of the Parks and Rec are, in many instances, performing the work manually and this is evident in Bodden Town. Bodden Town’s Coewood Beach is one of the hardest hit areas with the weeds. The private sector has also been tapped where available to assist with some of the more troublesome areas. It has been stressed, though, that the strategy must take the environmental effect of removing the weeds into account. When it is out on the ocean proper, sargassum floats on the surface for miles and miles and is a vital habitat for nurturing sea life. One only needs to double hook two bull Mahi out from under one of these stretches to see its importance to the ecosystem.

With the changes to the Earth’s oceans and their chemistry and temperature, it appears that the sargassum issue will be around indefinitely. The blooms appear to be getting larger and larger. It is now up to the Cayman Islands Government to act, with the environment in mind, to develop long-term solutions to the STINK!