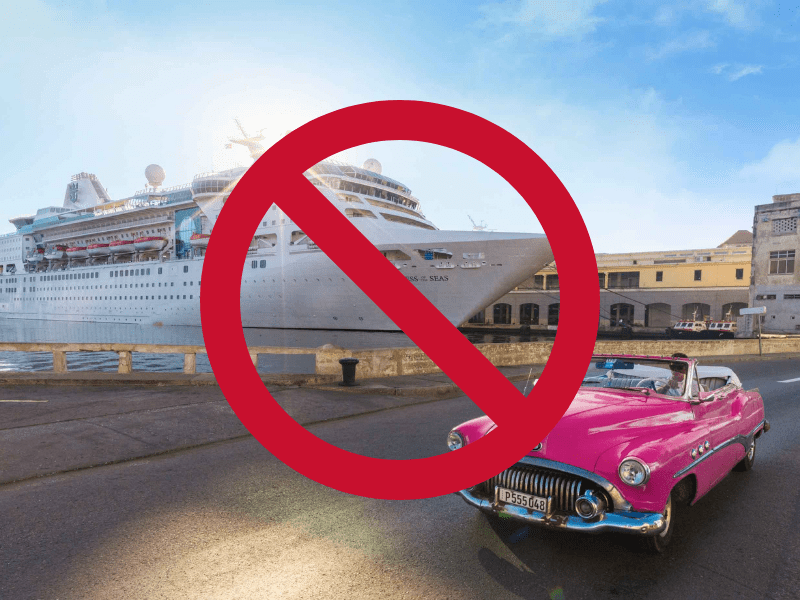 Well that sure didn’t last long did it… Recently United States President Donald Trump decided to instill a ban on all cruise ship traffic to the communist country of Cuba from the United States. This decision, already in place and being enforced as I pen this, affects hundreds of thousands of cruise ship passengers and effectively decimates the growing Cuban cruise ship industry.

What does a decision affecting Cuba and the United States have to do with Cayman you might ask? Well that’s simple… a lot! Many of those cruise ships that were slated for Cuban berths will now find themselves steaming into Cayman’s waters. Representatives of the Port Authority have stated that many people have been contacting them with requests to change their routes to the Cayman Islands amidst the US President’s announcement of the ban. Cruise ship companies schedule the ships routes sometimes years in advance. Possibly due to our close proximity to the island of Cuba, Cayman is often the reserve port when cruises cancel the Cuban leg of their voyages. Along with Cayman, Jamaica, Mexico and the Bahamas are also re-route options for the hulking ships. In addition to the new ships coming into Cayman, conversely there will be some ships that have to cancel their berths here when the cruise ship companies start making changes to the ship itineraries.

How this decision affects the Cayman Islands in the years to come remains to be seen. Cruise ships, which are in effect large ocean-going “cities” with large populations of consumers, have huge impacts to the areas/countries they visit. As it is fairly simple to re-route these ships – the companies decisions on where to put the Cuba ships could bring more or less people to Cayman’s shores in the long run. Cruise lines are corporate entities at the end of the day. It stands to reason that they will come up with itineraries that maximize earnings and profits. Currently Royal Caribbean and Carnival mainly are the two companies that bring the lion’s share of passengers to the Cayman Islands. Representatives have stated that ships are already being diverted to Cayman’s waters and that they expect that this will be a net positive for the territory.

As mentioned in my previous blog post, Cayman is engaged in a heated public debate regarding a new cruise ship pier. What do the people contending this issue think about the new, higher number of possible visitors coming to the island via cruise ship? Well, the crippling of the Cuban cruise ship industry in the short term certainly could be a win-win situation for Cayman. Less immediate competition in the region and more guests visiting the shops and restaurants certainly seems like positive news. Pro-pier types seem to think this will give much needed time to prepare for Cuba’s eventual entrance into the cruise ship industry and cement our status as a stopover for future, new Cuban ports. Anti-pier types seem to think this shows that Cayman will be getting more and more guests anyway and doesn’t necessarily need new pier facilities to be competitive as a destination.

This decision by President Trump has deep implications for the cruise ship industry in the short term. With an election year in 2020, how long with this policy be in place? Will it only be a matter of time before these travel restrictions are eased? What does that mean for Cayman in the future is anyone’s guess but for now, it seems like its full steam ahead for the cruise ships and the destination is Cayman!