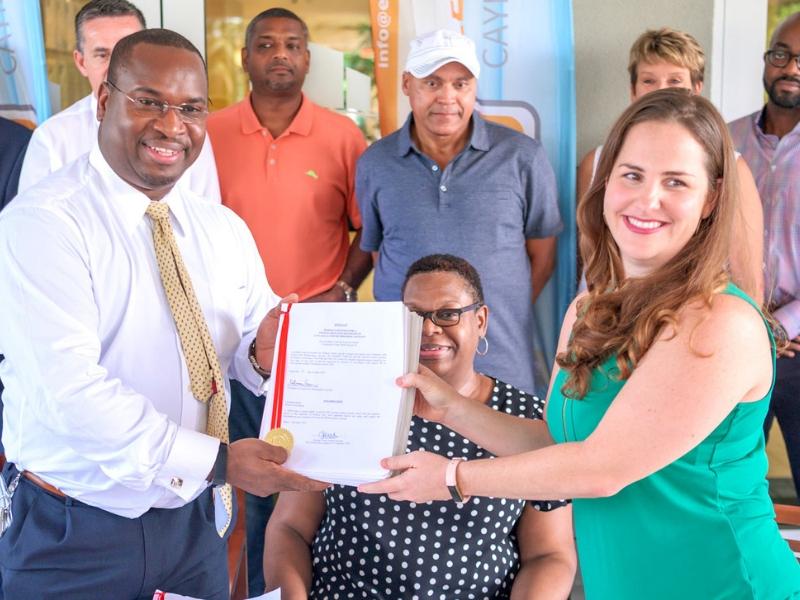 History was made recently in the Cayman Islands as a controversial cruise port petition was formally submitted to the Elections Office. The petition demands that there be a people’s vote for the massive civic effort being proposed in the territory’s capitol harbour. This marks the first time in Cayman’s history that citizens have attempted to utilise a clause in the Constitution allowing for citizen-initiated referendums on issues of national importance.

The petition, said to contain over 5,300 individual signatures, was submitted to the Elections Office as well as the Governor’s office. Mr. Howell (Chief Officer of The Ministry of Employment and Border Control) has indicated that the review of the document would begin immediately and that he will work full time on the herculean task of verifying the massive amount of signatures. He also stated that he would report directly to the Governor. Roughly 100 workers will be tasked with the going door to door in Cayman’s districts to verify the petition signer’s authenticity. The Cayman Islands Constitution requires that a quarter of the nation’s electorate must sign to trigger a referendum on the issue in question. In tandem with the door-knocking effort, the new workers will telephone individuals living abroad and host community outreach events for verification. They have also encouraged voters to stop in at the Elections Office for verification in-person when convenient. Mr. Howell has stated that he is confident that they will be able to wrap up the process and report to the Governor in a short amount of time and complete the job efficiently. He has indicated that they will do all they can and that he is confident that they will be able to reach everyone. Being that Cayman is a tiny island in the middle of the ocean; one could reasonably assume that he is correct.

But wait, the story gets more interesting… Even if the petition signers check out and the document is officially verified as accurate, that is no guarantee that a vote on the highly controversial cruise ship-berthing facility will ever actually necessarily take place. Cayman Islands Premier Alden McLaughlin has stated publicly that the government has sought legal advice on the constitutional matter and will take the “appropriate and advised” course of action if and when the Cabinet ever receives the verified petition. A representative of the Governor has stated that he would not judge the Cabinet’s stance yet prematurely but that the Governor has been committed to a fair process.

This cruise ship docking facility is a massive undertaking both engineering wise and financially. Will it create a showdown between the Crown-appointed Governor and the local government of this British Commonwealth Nation with the Constitution hanging in the balance? That remains to be seen. The government has sought legal advice. The petitioners have sought legal advice. The Governor has promised fairness and transparency throughout the process. One thing is for certain, all of the people of Cayman, both citizen and expatriate, will be witness to history in the making.